Create an Account - Increase your productivity, customize your experience, and engage in information you care about.

Long before America fell in love with Cliff Clavin off of the television show Cheers, Warrensburg had their own heartfelt appreciation for one of our own local mail carriers. Archie Cash, a private who served in the U. S Army during World War I and local postal worker, perished at 90 years young. He is only one of the 600 veterans buried at Sunset Hill.

One of the most recognizable names in the history of Warrensburg belongs to the Cheatham family. As a member of a banking family which owned the Citizen's Bank, Thomas did not just use his talent at the office. He served our city as the President of the Warrensburg Cemetery Association. His effort and vision for creating Sunset Hill into a high quality cemetery came true under his leadership. More members of the Cheatham family are buried about 25 yards east of Thomas's tombstone and a separate memorial is dedicated to the memory of his daughter, Vivian Cheatham DeFur and her husband Earl. The main strip of the entire cemetery is named in his honor.

"Love Is Patient, Love Is Forgiving, Love Understands, Love Is Sharing, Love Is A Treasure, Love Is Eternal," and love is the guiding light that united Tom and Louann late in February back in 1967. Their relationship grew from honeymoon dreams to cherished memories while both focused their hearts on believing in forever. Louann passed away in 1992.

Standing tall amongst a handful of tiny graves lies 8 day old John Clifford. John is only one of the dozens of infants buried together in the corner of the cemetery near the work barn. Engraved in these tiny epitaphs are angels, hearts, crosses, stars, lambs, flowers, horses, toy soldiers, and the swollen tears of loved ones. Bring a handkerchief when visiting this area.

Buried to the left of her famous husband and surrounded by her family, lays rest to Missouri's very first State Regent, Anna Ewing Cockrell. Moreover, as one of the early leaders of the Daughters of the American Revolution, Anna's life is cherished by those who share her common ancestry.

Perhaps the most nationally recognized person in the cemetery, Francis Marion Cockrell served the state of Missouri in Washington as a Senator for 31 years from 1874 to 1905. This former Confederate General passed away in Washington and his remains were brought back to his hometown to be buried at Sunset Hill. The Johnson County Historical Society has extensive records on him and numerous other Warrensburg residents.

Three years following the Civil War, George W Colbern graciously put aside 13 acres of his property in order to create the eternal resting place now called Sunset Hill. Previously called Colbern Cemetery, which initially had sold burial plots for just ten dollars back in 1868, the cemetery was deeded over to the city in 1880. On a side note, the Colbern family owned the Electric Springs Resort area from 1836 through 1881 which George would eventually buy back a decade later in 1891.

In the shape of a large ball sitting on top of a stack of wood, lies the remains of Edward Coleman. Located at the crossroads of the North Entrance and Cheatham roads, the back of the sphere asks a heartfelt question. "My Dear Friends, Where Will You Spend Eternity?" Perhaps as a last chance for sharing his faith, Edward hopes visitors would answer "in heaven."

During the Civil War, 220,000 African American soldiers enlisted to fight for the Union. After fighting in the war, the all black 10th Cavalry would continue fighting the Apaches during the 1870s and 1880s and even chase Pancho Villa south of the border during the Wilson administration. Comer, who joined the service at 18 year's old against his mother's wishes, would serve our country in the 10th cavalry during both World Wars. Harry S Truman awarded Comer the rank of Captain as he became the first African American Captain from Missouri.

In one of the most recent tragedies to affect Warrensburg, High School recent graduate Angel Conant was killed in a car wreck in Illinois. Her grave, located just feet off of the main drive, is marked by an eternal flame.

Standing 23 feet tall and resembling the Washington Monument, stands a 17,000 pound statue honoring the Confederate soldiers of the Civil War. Located at the corner of Collins and Cheatham, this can't miss monument is the tallest spectacle in the cemetery. The structure was delivered to Warrensburg by railroad and assembled together from 5 separate pieces. 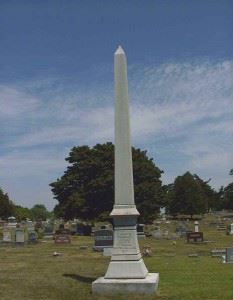 Cooper, an African-American blacksmith was one of the co-founders of the Baptist Church in Montserrat. This war veteran's grandson, Mazell Campbell who is also buried at Sunset Hill, was highly respected for his work at Knob Noster State Park in which he worked one day with a fractured leg.

As a standout in Democratic Party Politics, Leland Culp served Warrensburg in the council and as city mayor. Visitors may view the gravesite for this World War II veteran and creator of Inland Chemical Company by the shady trees at the north side of the cemetery near the tombstone of James C. Kirkpatrick.